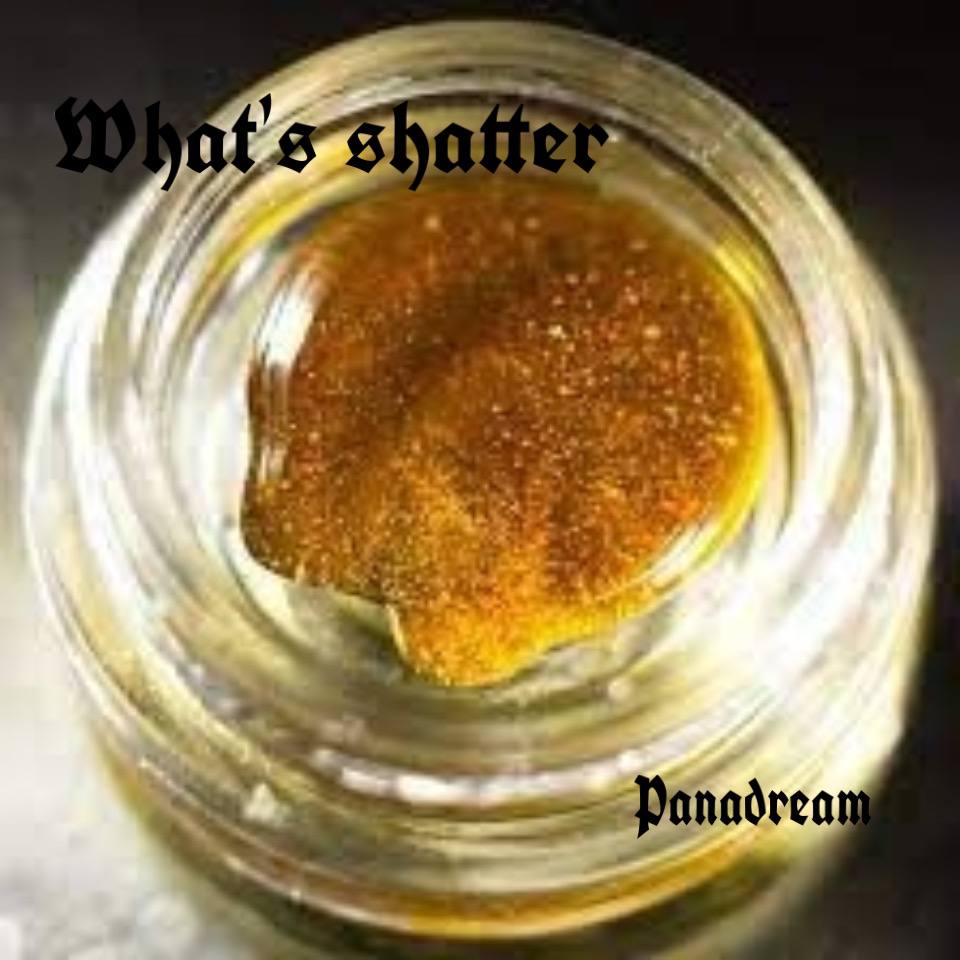 Shatter is a cannabis extract that is solid and translucent in appearance, as if you could shatter it like glass. It achieves its glass-like appearance through specific processing techniques involving solvents like butane or other hydrocarbons. Concentrating essential compounds like THC and CBD, shatter offers the benefits of cannabis in a highly concentrated, compact form that is popularly dabbed or vaporized.

Shatter is a cannabis concentrate that is named for its hard, glass-like consistency that tends to crack, or shatter, when broken apart. It is typically gold or amber in color. Although shatter is popularly believed to be more potent or pure than other types of extracts, this is not always true; its appearance instead has only to do with the extract’s molecules being less agitated during production.

Shatter is usually dabbed, a method of consumption that involves flash vaporization off of a specialized water pipe called a dab rig. This glassy extract has a reputation for being potent, though it can range in potency depending on the chemical composition of the source plant and the extraction techniques and equipment used. While the high watermark for cannabis flower tends to sit around 30% THC, shatter extracts may test upward of 80% to 90% THC.

How is shatter made?

Shatter can be made using a variety of production methods, but it is typically created using butane or hydrocarbon solvents. Butane extracts are also called BHO, short for “butane hash oil.” To make BHO, cannabis is typically contained in a tube where butane or other hydrocarbons are pushed through the plant material, stripping away desirable compounds like THC and CBD. The concentrated oil is collected and may be further refined using additional techniques. “Purging,” for example, refers to the removal of excess residual solvents using a vacuum chamber, and “winterization” refers to the separation of fats and lipids from the oil.

Shatter and other types of BHO are extremely dangerous to make using at-home DIY setups due to the flammability of butane fumes. Attempts to make BHO in home environments have resulted in several accidental explosions. Professional-grade shatter is produced using safe closed-loop systems that prevent these fumes from entering the ambient environment.

Difference between shatter and wax

Shatter refers to cannabis extracts that take on a hard, glassy form while waxes are softer and more malleable. The difference between shatter and wax is primarily a superficial one: it’s merely a cosmetic difference caused by a difference in molecular agitation. Shatter maintains its glass-like consistency because the molecules in the extract were left undisturbed during processing, whereas the molecules in wax were agitated.

The level of transparency achieved in the production process does not reflect the potency of the extract. In other words, shatter is not necessarily higher in THC than wax, and vice versa. To determine the potency and chemical composition of any given extract, refer to the lab results of individual products at your local dispensary.

One practical difference between shatter and wax has to do with ease of use. Wax is softer and sometimes easier to handle using dabbing tools like scoops. Because shatter tends to crack apart into unpredictably sized pieces when broken, you may find that it’s a little harder to scoop and dose the correct sized dab.

What is CBD shatter?

While shatter is most well known for its high levels of THC, many concentrate makers also produce a variety shatter that is high in cannabidiol (CBD) and very low in THC. In general, CBD shatter is geared primarily toward consumers who want the potential medicinal and therapeutic benefits of the cannabis plant without the intoxicating effects of THC.

Because CBD shatter contains a concentrated, potent dose of CBD, it can be an excellent option for medical marijuana patients and other consumers interested in the potential health and wellness benefits of the cannabinoids and terpenes in cannabis concentrates. Just be sure to purchase shatter that has been manufactured specifically to contain high levels of CBD and low levels of THC, as this will maximize any therapeutic effects of CBD while minimizing the intoxication of THC.

What’s the history of shatter?

Shatter is a relatively new addition to the history of cannabis consumption. Its roots can be traced to the age-old practice of hashish production. By the late 1990s the process of modern cannabis concentrate production was being refined, and what we’d now consider shatter was first produced.

By the late 1990s, Canadian cannabis maker BudderKing first marketed budder and shatter, with its products hitting the shelves of dispensaries in 2003. The techniques for producing these products were published in Cannabis Culture magazine in 2005 and by the 2010s, shatter emerged as a staple method of cannabis consumption. Its popularity lead many dabbers and concentrate users to proclaim, “If it doesn’t shatter, it doesn’t matter.”

Is shatter the same as dabs?

Technically, yes. All shatter can be dabbed, but not all dabs are shatter. Dabbing is a popular method of consuming cannabis concentrates that involves a small water pipe called a dab rig. The rig has a flat bowl and a “nail,” which is designed to tolerate high temperatures so it can vaporize the concentrate. In addition to shatter, other forms of cannabis concentrates can also be dabs.

Dabbing concentrated marijuana products like shatter typically offers a more potent high, as well as terpene-rich flavors and aromas, especially compared with smoking marijuana. Unlike smoking though, dabbing marijuana shatter does require the right tools and a certain amount of know-how, which can make first-timers nervous. The temperature of the nail at the moment of consumption, for example, will affect flavor, and may alter any potentially healthful effects.

What are the side effects of shatter?

As shatter and other marijuana concentrates have significant THC levels, it’s important to be mindful of the potential adverse effects that may come from consuming cannabis this way. Though THC may have some medical and therapeutic uses, overconsumption could cause unpleasant experiences, such as anxiety and paranoia. If you’re new to these substances, start with the smallest viable dab and gradually increase your dose to avoid these unwanted side effects.

What happens if you eat shatter?

Shatter requires decarboxylation to produce the desired result. This form of concentrate is meant to be vaporized using a dab rig, e-rig, vape pen, or vaporizer, which decarboxylates the potent cannabinoids so they can interact with the body immediately. Consuming unheated shatter is unlikely to produce any desirable effect.

How should I store shatter?

When stored improperly shatter can begin to break down and lose its initial snappy consistency, flavor, and potency. To prevent this degradation, it should always be stored in an airtight, lightproof container. Ideally, it should be stored in a cool room. To ensure the concentrate stays consistent for as long as possible, protect it from high temperatures, moisture, oxygen, ultraviolet light, and direct sunlight.

Remember, heat is shatter’s worst enemy. It causes the cannabinoids to activate. That should happen only upon consumption, not while it’s resting in a container. Dispensaries, smoke shops, and many online stores offer concentrate storage accessories such as silicone containers, and most cannabis concentrates come in appropriate containers that may be reused.

Why does shatter turn into sugar, budder, or crumble?

Despite the wide range of textures, colors, and consistencies of cannabis extracts, they all have similar production processes. If certain steps aren’t closely followed, if solutions are mishandled at any point of production, or if the shatter isn’t stored correctly, it may ultimately yield something other than the translucent, glass-like product. Other factors may affect the production process. Agitation, high temperatures, residual solvents, or leftover moisture from the marijuana plant material all can cause the cannabis oil to end up as budder, rather than yielding the desired snap or brittleness of shatter.

THC Distillate what is it