What is THC Syrup? How Do You Make It? - Weed Recipes
Skip to content 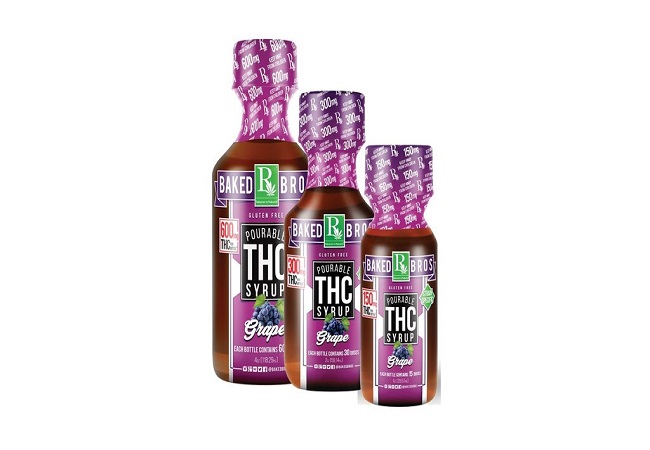 THC syrups are infinitely versatile, as well as discreet and potent. While these products may resemble more intoxicating and potentially dangerous substances, cannabis-infused syrups are not the same as “sizzurp,” or “lean.”

What’s THC syrup and what is it used for? We’ll go over this popular cannabis product and its many applications.

What is THC syrup?

THC syrup consists of hash oil or another type of cannabis concentrate, typically combined with vegetable glycerine, a sweetener such as sugar or agave, and added flavors.

Its texture is similar to that of a thick cough syrup and the effects are similar to traditional cannabis edibles.

THC syrup can be purchased in some dispensaries, or you can make your own using only a few simple ingredients. Commercial products come in a wide variety of flavors and are usually packaged in containers reminiscent of traditional cough medicine bottles.

These products should be clearly labeled with the THC content, measured in milligrams, for easy dosing.

Onset times and effects will vary based on your consumption method and other factors, such as your tolerance level and how much food is in your stomach at the time of consumption.

THC syrups have similar effects and a slightly quicker onset time compared to traditional baked edibles. These products can be high in sugar, so it’s best to enjoy in moderation.

Best ways to use THC syrup

Much like a cannabis tincture, the cannabinoids found in THC syrup are easily absorbed through the membrane under the tongue.

Simply drop the desired amount under your tongue and hold it there for one to two minutes before swallowing.

Simply measure out your desired dose and bottoms up!

This method has a slower onset time than the sublingual method, but THC in the form of a liquid edible tends to take effect more quickly than traditional edibles like weed cake or brownies.

THC syrup can be a bit too sticky and sweet for some palates, so it may be a good idea to mix your dose into a beverage such as seltzer water or non-alcoholic ginger beer.

Cherry-flavored syrup and lemon-lime soda and be combined to create a delicious Mary Jane Shirley Temple.

The effects of THC syrup can be extremely powerful, so it’s not recommended to mix with alcohol. If you partake in cannabis but don’t drink, THC syrup mixed drinks can be a great alternative to alcohol at social gatherings.

What are waffles without syrup? Flavors such as maple, vanilla, and even strawberry make excellent toppings for french toast, pancakes, waffles, and more!

As delicious as this winning combination is, remember to measure out your dose before you pour it onto your plate. If you like to meticulously fill every groove of your waffle, try diluting your THC syrup with an unmedicated variety.

Difference between THC syrup and Lean

While THC syrup has its roots in hip hop culture, it should not be confused with “lean”—a term that refers to prescription codeine-promethazine cough syrup mixed with soda and often alcohol.

Also known as purple drank, sizzurp, dirty Sprite, and many other names, different forms of lean have been used since at least the 1960s, when blues singers would mix cough syrup with alcohol for more profound effects.

Lean rose to further prominence when glorified by popular Houston-based hip hop artists. One particularly vocal lean-user was DJ Screw, largely considered the father of the “chopped and screwed” genre.

As the popularity of this musical style gained national attention in the 1990s and early 2000s, so grew the popularity of “leaning.” Top rappers including Lil Wayne and Future have dedicated songs and even album titles to the purple drank.

Codeine is highly addictive and can lead to overdose and even death, especially when mixed with other drugs and alcohol.

Less than a year after Three Six Mafia’s “Sippin on Some Sizzurp” exploded on the charts, DJ Screw was found dead in his studio bathroom after suffering a heart attack at only 29 years old.

In 2007, Pimp C of the rap duo UGK was also found dead as a result of a deadly combination of codeine-promethazine and sleep apnea.

THC syrup is also different from “weed lean,” which is simply cannabis-infused purple drank. The THC syrups found in reputable dispensaries are not mixed with cough medicine or opiates like codeine, and therefore do not have the same devastating impacts.

How to Make THC Syrup

There are many methods of customizing THC syrup to suit a variety of tastes.

When using cannabis flower, the first step is to decarboxylate your desired amount of weed. You can skip this step if you choose to use cannabis concentrates such as wax or hash oil.

For a neutral-flavored simple syrup, combine equal parts water and sugar in a saucepan and bring to a boil. Once the sugar has dissolved, reduce the heat to medium-low.

Add the decarbed flower or cannabis concentrate and continue to heat for about 30 minutes.

Reduce heat to low and add a small amount of vegetable glycerine(2 tablespoons for every 3 cups of liquid).

Continue cooking on very low for 5 more minutes, then remove from the heat. If using cannabis flower, you’ll want to strain out and discard the plant matter before transferring to a jar with an airtight lid.

This recipe is excellent to sweeten beverages, add to homemade BBQ sauce, or drizzle over a fresh fruit salad. You can also add a variety of natural flavors to your THC syrup, such as vanilla or lemon extracts.

You can also use this preparation method with your favorite type of sugary soda in place of the sugar-water mixture. Coca Cola, Dr. Pepper, and Orange Fanta are ideal for masking the herbal flavor of cannabis.

Edibles to make at home