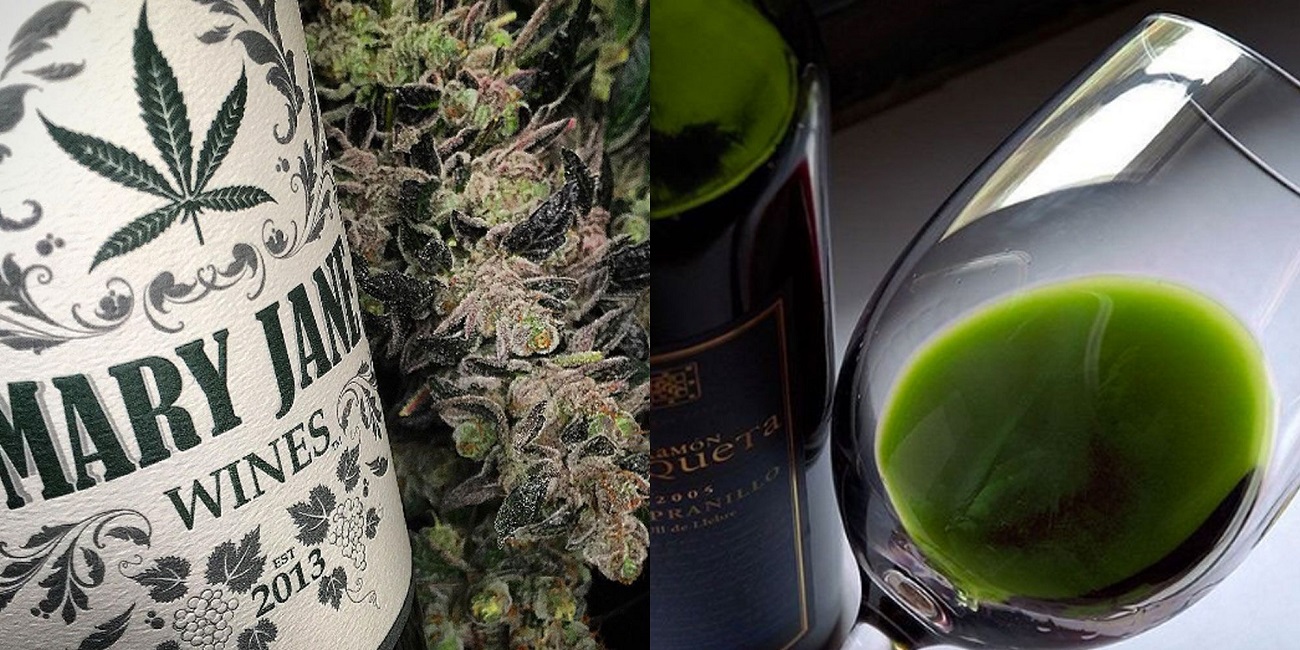 Yes, weed wine is a thing, and it’s exactly what it sounds like – a great way of killing two birds with one stone(r). Sorry about that one.

We are often asked if weed wine was just created. Is this is a new invention riding the wave of the recent legalization of Lady Jane in California? The answer is, the popularity and the attention to weed wine are new, but the practice of making it isn’t. The thing is, infused or aromatized wines, in general, have been a thing for almost as long as mankind understood that fermented grapes have a lot to offer. Honey and mint infused wines come to mind, or the more exotic snake wine from Vietnam (yup, that’s a thing, as well).

Fortified wines are just normal wines that have distilled spirits added to them. The spirit usually being brandy. They are not infused or flavored wines.

Aromatized wines, on the other hand, are indeed X-flavored, usually by adding herbs. To make it all a little more complex, infusing or fortifying wine is different from actually making it from whatever fruit you prefer (watermelon and blueberry are two of the most popular choices besides grape). If you are wondering, yes you can indeed make your wine entirely from weed.

So Is It Legal?

As of November 2016, recreational marijuana is legal in California. A slight majority voted in favor of Prop 64. This makes The Golden State one of the latest US states to legalize recreational ganja. They followed Colorado (2012), Washington (ditto), Alaska (2014), and Oregon (2014).

Now, this new law applies to the regulation of marijuana specifically. The legalities of weed-infused wines are a bit hazier. The prop didn’t address that issue at all. Still, seeing as the rest of the pot-friendly states explicitly disallow making weed wine, California is the only place you can get this weed infused wine elixir.

What Does California ABC Say About Weed Wine?

The Alcoholic Beverage Commission does have some specific guidance on mixing alcohol and marijuana. They make it clear that this is no bueno. Specifically, you are not allowed to sell alcohol and marijuana in the same store. That makes it tough to offer weed-infused wine.

There is also a specific prohibition against “edible cannabis products” being sold as alcoholic products.

Marijuana Wine Haze: How Old Is the Idea, Actually?

Just how powerful is pot wine? Historians tell us that an Eastern Han Dynasty surgeon by the name of Hua Tuo (or Hua-t’o), used wine infused with cannabis resin as an anesthetic. Sadly, we don’t know the exact recipe. This was in the 2nd century CE. Marijuana has been used as a medicinal plant for at least 4,800 years.

Another target audience for weed wine in ancient times were religious initiates of all colors and creeds. The ancient Greeks to the early Christians included the pot-infused wine in their ceremonies. The wine apparently caused powerful trips and eased the revelers into a trance. That could explain some things…

Weed-infused wine is not a new idea for Californian vintners. Certain California winemakers have made it since medical marijuana was legalized, some longer. They were usually low key about it. Most of what was made was shared with family and friends. Nowadays, the industry is booming, with the Sonoma County being a hotbed of weed wine experimentation.

Heads up: Our posts may contain affiliate links. If you click through and purchase we receive a small fee. That helps us keep the lights on! Thanks.

Weed Wine Recipe | Can I Make My Own?

So you want to make your own weed wine? Here is a video that explains how it is made.

If you do decide to make your own weed wine, you should keep in mind that it is white wine that lends itself particularly well to infusion, giving a nice balanced aroma.

If you want a source for adding CBD directly to make your own weed wine, you can check out this source. Weed wine made with CBD will give leave you relaxed with a clearer head. CBD doesn’t have the same effect on perception as THC does.

How Can I Get Some Weed Wine?

If you’d rather sample some vintages instead of making your own, there’s a fine selection of brands.

California is currently the only kush-friendly state that doesn’t explicitly ban making and drinking weed wine. If you’d like to try weed wine in California, this is the place to go.

There is a popular brand in Europe called Canna Wine. This is one of the more legitimate sources of quality weed wine we’ve found. They don’t have any US distribution yet, but you can check out their weed wine lineup here. [update: It appears they are now focused on CBD infused wine with alcohol. This is not the same as THC wine, but it’s worth giving it a try.]

A popular choice among organic oriented folks is Canna Vine, made by Lisa Molyneux. If you’re intrigued by the very idea of weed-infused food and drinks, you might want to pay a visit to Santa Rosa and the Sonoma Cannabis Company, where you can sample anything from marijuana leaf pesto to canna wine. Of course, like all the good stuff in life, it’s not cheap. Weed wine can retail for $100 to $400 for a half bottle.

Weed wine taste depends on numerous factors, but painting with a broad brush, it pretty much boils down to red grapes vs. white. Either way, the aromas, and the flavors can be a bit confusing, going from freshly cut hay to freshly brewed hibiscus. You may not even know that you’re drinking weed wine (depending on your palate). However, once the THC kicks in, you’ll know.

Drinking about half a glass of weed wine feels like you downed three glasses of strong red wine on an empty stomach. Speaking of which, red grapes tend to overpower the weed and give you the same high as if you ate too many brownies, with the risk of developing a severe case of couch-lock. On the flipside, white grapes make for wines with lower alcohol levels and better aromatic balance, resulting in a more enjoyable high.