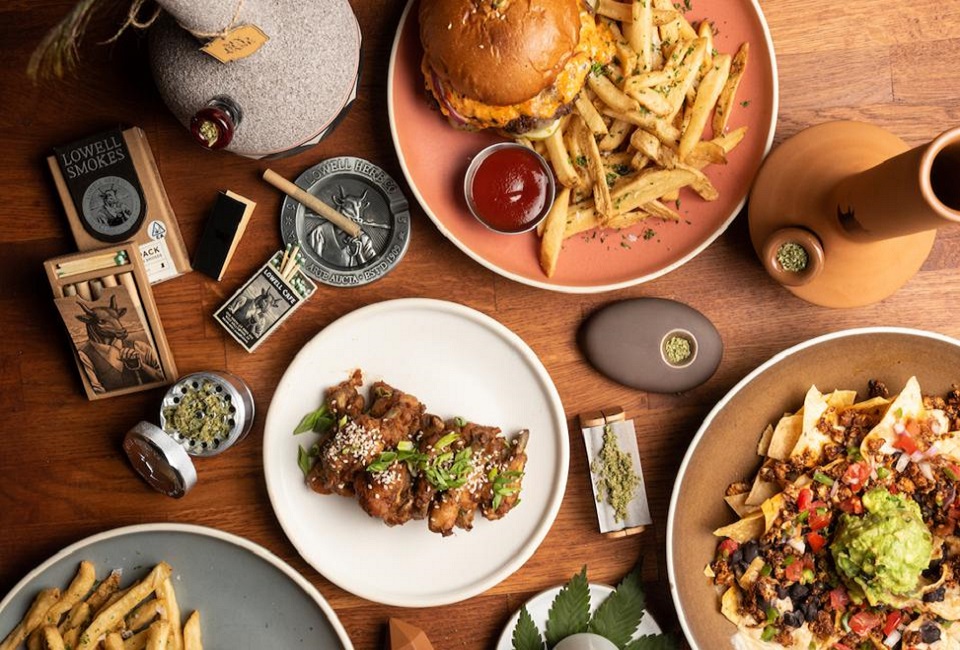 In the last decade, marijuana has moved into the mainstream and onto the dinner table. As more chefs and entrepreneurs get in on the green rush, we’re left to wonder: How do you eat and drink cannabis?

On a recent Friday night, I got together with 180 strangers to get stoned.

We convened at a swank event space at the invitation of 99th Floor, a cannabis dinner party pop-up company helmed by Jeepney chef Miguel Trinidad.

“We want to destigmatize cannabis through the universal language of food,” Trinidad said, before sending out a tour de force of cannabis cooking: Weed permeated the stock for the beef shank served in a gingery broth with spaetzle and fry bread; its flower was shaved over a carpaccio of charred, cannabis-infused octopus; terpenes, nonpsychoactive aromatic chemical compounds from the cannabis plant, provided floral notes to the roasted fennel that accompanied lamb chops that had been cooked, sous vide, in infused fat. (And my fears aside, nothing tasted like bong water. It was all delicious.) As each course was served, Trinidad called attention to where THC (the compound responsible for marijuana’s psychoactive effects) was incorporated—in a smoky eggplant puree with the carpaccio, in a Bordelaise sauce on the lamb—allowing us to moderate our intake somewhat. It was good that I’d talked to Trinidad about all of this ahead of time, because somewhere between the second and third courses, my eyeballs started feeling really weird, and my notes from the rest of the dinner were limited to: “Feeling great. Mirage burps. Womp womp.”

Trinidad and his business partner, Doug Cohen, compare their approach to cannabis as analogous to a fine-dining meal with wine pairings. “The goal is not to have you hammered,” says Cohen. “It’s a journey of the senses, an experience.”

99th Floor is one of many new businesses working to meet the new cannabis consumer: me, and maybe also you. Thanks to the growing social acceptance and legalization of cannabis, the number of adults trying it for the first time is skyrocketing. And an awful lot of us aren’t smoking it—we are eating and drinking it.

According to studies by Arcview Market Research and BDS Analytics, which studies cannabis consumption, the top growth category is consumable cannabis. For the most part, that means edibles, which is a section of the cannabis market that has evolved far past the pot brownie; it also includes THC- and CBD-infused drinks, even ice cream. And across the nation, chefs and diners are exploring the versatility of the cannabis plant at the table in ways Jerry Garcia could never have imagined: infusing foods, pairing inhaled marijuana with food, and mining the spectrum of flavor profiles and distinct psychoactive effects of different cannabis strains.

At 99th Floor, I was lucky to be in the hands of a chef who was conservative with the dosing, so I left the evening pleasantly buzzed and not too high to find my way home. But it’s the wild west when it comes to culinary cannabis, and for every carefully dosed dinner party series, there’s somebody eating too many THC-laced gummies and having a terrible night. Wondering how to navigate this new world? Read on. —Executive Editor Karen Shimizu

Put simply, marijuana and hemp are cousins in the cannabis family. The primary difference is that marijuana contains more tetra-hydrocannabinol, or THC, which has psychoactive effects on the human brain. Hemp, on the other hand, has extremely low levels of THC (0.3% or less) and is nonintoxicating. Both contain scores of cannabinoids (including cannabidiol, or CBD) and terpenes, which are aromatic chemical compounds that many believe can aid relaxation, cause changes in mood, and decrease inflammation. Most CBD on the market is derived from hemp and has no psychoactive effects.

Without guidelines from the FDA (which is still exploring how to regulate CBD), it’s critical that consumers do their homework before purchasing CBD products. Ashlae Warner of SuperGood, a CBD company based in Denver, recommends going to a company’s website and looking for the Certificate of Analysis (COA), or third-party testing results that show the quantity of cannabinoids in the product. If the company won’t share one, move on. When it comes to THC edibles, states where recreational marijuana is legal, including California, Colorado, Massachusetts, and Nevada, require testing for potency and contaminants by a third-party laboratory—but standards vary. A good sign that the product you’re considering is legit? Prominent dosing information and testing by an accredited lab right where you can see it: on the label or on the website.

Cooking with marijuana demands an understanding of decarboxylation, the process of heating the cannabis flower that breaks the carbon chain, converting tetrahydrocannabinolic acid to THC, to give cannabis its effects. Do it wrong and at best you’ll fail to unlock its psychoactive properties; at worst you’ll ruin the bud altogether (expensive mistake!). Plus, unless you’re testing for THC, you won’t know how much you’re consuming. An alternative option is purchasing packaged products that do the work for you.

You can use this THC-infused sweetener as you would any other—in baked goods, sprinkled on fruit, or stirred into iced tea

If you’re intent on making cannabutter at home, these two nifty infusers make life easier—just be mindful of temperature and time.

This all-in-one infuser looks like a coffeepot. Add your plant material, some butter, close the lid, push a button, and presto: infused butter in two hours

Although not specifically made for cannabis use, this gizmo is designed for infusing botanicals into oil and butter and comes in multiple happy colors

At the Original Cannabis Cafe in Los Angeles, guests can openly smoke pot and eat infused edibles while snacking on vegan nachos and sticky tamarind wings. Its opening represents the culmination of three-and-a-half years of legal hoop-jumping and bureaucratic negotiating. Guests order food and drinks from one menu, and pre-rolled joints, loose marijuana flower, edibles, and cannabis concentrates from another. Bongs and glass pipes are available for rent. Due to California law, cannabis and alcohol are prohibited from being sold at the same venue, so all drinks are nonalcoholic, though some of them contain cannabis. Nothing on the food menu is infused, and guests can’t take home any leftover cannabis. The idea is to enjoy imbibing before and during your meal, as you would with a glass of wine.

That last point is particularly important to chef Andrea Drummer. The soft-spoken 47-year-old wants to destigmatize cannabis consumption in the U.S. “There’s no better way to normalize [cannabis] than by combining it with something we do every day: eat,” Drummer says. “It’s two communal experiences at once.”

She hopes that the restuarant and other operations like it will help change both the cultural perception of cannabis and the legal status quo. Despite more states legalizing, cannabis arrests are rising, and according to the ACLU, black users are nearly four times more likely to be arrested than white, despite roughly equal usage.

The cafe is attempting to counter some of that disparity by offering a Social Equity and Reparative Justice Program, which gives employment priority to recently pardoned nonviolent cannabis offenders reentering society. Drummer is outspoken on this point. “Why is it that I get to earn a living by doing something that’s normal, while other people are doing life in prison?” she asks. —Jamie Feldmar

Are cannabis-infused drinks the future of the beverage industry?

Drinks offer an easy pathway to cannabis consumption. “The experience is something that’s familiar,” says Niccolo Aieta, founder and chief technology officer of Colorado-based Spherex, which makes Phyx, a THC-infused sparkling water. “I have a drink [because] I want to celebrate or party or relax.” The earliest adopters of cannabis drinks have been small companies, but big beverage isn’t far behind: Last year, Constellation Brands (whose holdings include Modelo Negra and Corona) invested $4 billion in a Canadian marijuana company, and Heavenly Rx, a hemp- and CBD-focused wellness company, announced a substantial investment in Jones Soda in July 2019. Like alcohol, infused drinks are digested and absorbed into the bloodstream relatively quickly. The onset of the high can be faster than with edibles, and imbibers can more easily quantify how much they’re drinking (e.g., a can of sparkling water) and pull back as needed.

Cannabis and hops have similar chemical properties, and in Portland, Oregon, Coalition Brewingcelebrates their synergy with Two Flowers, a CBD-infused IPA . In partnership with CannaCraft in Santa Rosa, California, LagunitasBrewing Company makes Hi-Fi Hops,an IPA-inspired sparkling beverage infused with THC. (With 10 milligrams of THC or 5 milligrams each of THC and CBD; sold at dispensaries in California and Colorado.)

A bottle of Phyx sparkling water contains 2.5 milligrams each of THC and CBD. “You get the feeling of two glasses of wine—calm, relaxed,” says marketing director Kelly Calvillo .

“Wine country is weed country,” says Jamie Evans, founder of The Herb Somm, a cannabis lifestyle brand in the San Francisco Bay Area and author of the forthcoming book The Ultimate Guide to CBD. With a similar agricultural focus and emphasis on terroir, Evans says, “It makes sense for both industries to come together to collaborate.” There are those who agree, as the rise of canna-tourism and wine-and-weed tours cropping up in destinations like Sonoma County attest. But there are just as many wine growers and vintners who see the cannabis industry as a danger to their livelihood. Because cannabis and wine are farmed in many of the same places, the new crop has been the source of some tension in both industries, which compete for laborers, real estate, and customers.