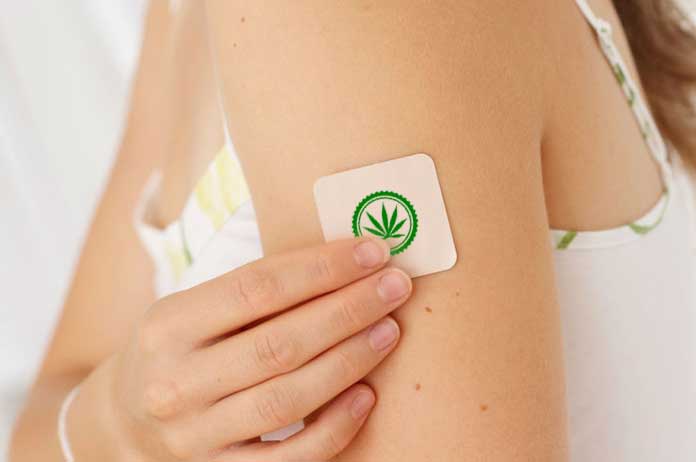 Transdermal patches are probably the least talked about products in the cannabis market. In fact, many stores in the recreational market do not even bother carrying them. Can’t really fault them, as many people do not know what a cannabis pain patch is, and you can’t really expect people to buy something they don’t know exists and/or how it works. Let’s change that!

A transdermal patch is basically a clear sticker that is infused with cannabinoids. You’ve probably heard of the nicotine patches that help people quit smoking. Well, it is basically the same product; however, you are getting isolated cannabinoids instead of nicotine.

How To Use A Transdermal Pain Patch

The patch is designed to be placed on a venous part of your body (inner wrist or top of foot) and provide a controlled release of cannabinoids into your bloodstream over the course of 12 hours all the way to 96 hours. In other words, instead of having to take 10mg of THC or CBD oils multiple times a day, the patch can slowly release 100mg of cannabinoids into your bloodstream over time. It’s the ultimate in convenience and discretion! You would think it would be more popular; however, there are some drawbacks to transdermal delivery.

When it comes to their active ingredients from cannabis, transdermal patches are strictly made up of cannabinoids — usually a combination of THC, CBD, CBN, and CBG. This means you will engage the endocannabinoid system and experience relief; however, this also means you will not experience a robust entourage effect when you consume this product. In short, transdermal patches do not appeal to the consumer who is looking for a great high — which makes up the majority of the cannabis market.

Who Should Use A Cannabis Pain Patch?

I have found that transdermal patches are mostly used by people who are looking for pain relief and/or need help sleeping. These are customers who are shopping with the hopes of getting relief for a certain condition, not a high. This is not to say you won’t experience any psychoactive effects from a transdermal patch. You will definitely get high from a THC patch; however, as I mentioned previously, the high will be less vibrant than smoking or vaping a full-spectrum product.

Most people use transdermal patches for the same reasons they use cannabinoid-infused topicals or tinctures, i.e., the high is not the point. People are looking for relief from a variety of symptoms. All of these topical delivery methods provide relief; however, they work in different ways.

An estimated 25 million U.S. adults suffer from chronic pain. According to the Journal of Pain, over 126 million adults experienced pain to some extent within the last three months.

There are dozens of conditions that cause pain, either as a direct impact of the condition or as an effect of traditional treatment methods. When you consider injuries and other factors, it becomes clear that pain affects more people than not. Unfortunately, many medications provided for pain are addictive, ineffective, or produce other unwanted side effects.

With the legalization of medical marijuana, cannabis has changed the way people can treat and manage pain.

The main difference between a topical and a transdermal patch is that topicals are designed to provide relief in the location in which they are applied, and transdermal patches utilize permeation enhancers to drive cannabinoids past your skin and into your bloodstream; therefore, providing all-over relief. In this way, cannabis pain patches work like tinctures — absorbed directly into your bloodstream.

Unfortunately, for many people, cannabinoid delivery into the bloodstream is a dealbreaker, as they are looking for relief while minimizing the risk of testing positive for THC by their employer. Cannabis in the bloodstream means a positive test result and the loss of a job for some. This has many people choosing topicals instead of transdermal patches, even though transdermal patches are better suited for their needs.

When I was budtending, I found that transdermal patches were a great product; however, very few people were using them consistently. In fact, in all my years, I do not think I came across one person who used them daily.

To be fair, transdermal patches can be expensive, and you are not going to be getting any help from your insurance company to pay for your medical marijuana. For many people, other cannabis products make more sense from a financial point of view, but, just because people aren’t going to use them every day, does not mean there is never a good time to use them.

Transdermal Patches Are Great For Discretion

When I was budtending, I consistently received questions around discretion and travel. Whether you are traveling through an airport or just going to a family gathering, cannabis use can often be frowned upon. This creates a big problem for people who are using cannabis as medicine.

Enter transdermal patches! A transdermal patch can be easily hidden and provide a lot of relief for things like pain and inflammation. It may not be the same large dosage that you typically use to help with your symptoms; however, the right patches deliver enough relief to help you get through a short period of time.

The cannabinoid pain patch, which is manufactured by a company called Cannabis Science, does not yet have a firm U.S. release date (though dispensaries in Los Angeles are expected to be the first to receive it). Cannabis is not legal at the federal level, but 26 states and the District of Columbia have laws broadly legalizing marijuana in some form.

While many are skeptical about cannabis given its stigma as a recreational gateway drug, its medicinal benefits have a long history of success treating ailments ranging from nausea to breast cancer.

Tapping Into the Power of Cannabinoids

The cannabis patch will deliver high-potency cannabinoid extract through a transdermal adhesive patch. Transdermal means the medication will be absorbed through the skin, then it will travel through the bloodstream.

The application of the drug through the skin has benefits over other types of medicines that are administered orally or intravenously, for example. The patch provides a controlled dose of medication that is also carefully released. The patch may release the medication by using a porous membrane that encourages a gradual release of medication into the skin, or through adding medication within the adhesive that melts from the patient’s own body heat.

After entering the bloodstream, the cannabinoid extract in the patch goes to the central nervous system to reduce pain. High-potency cannabinoid extract acts as a pain reliever and anti-inflammatory agent—its pain-killing properties are similar to the natural painkillers produced in your body. Cannabinoids are so effective at reducing swelling and pain that some studies have found it more effective than traditional pharmaceutical anti-inflammatories.

Same Day Cannabis Delivery in Langley Near Me