How To Decarboxylate Marijuana Trim - Weed Recipes
Skip to content 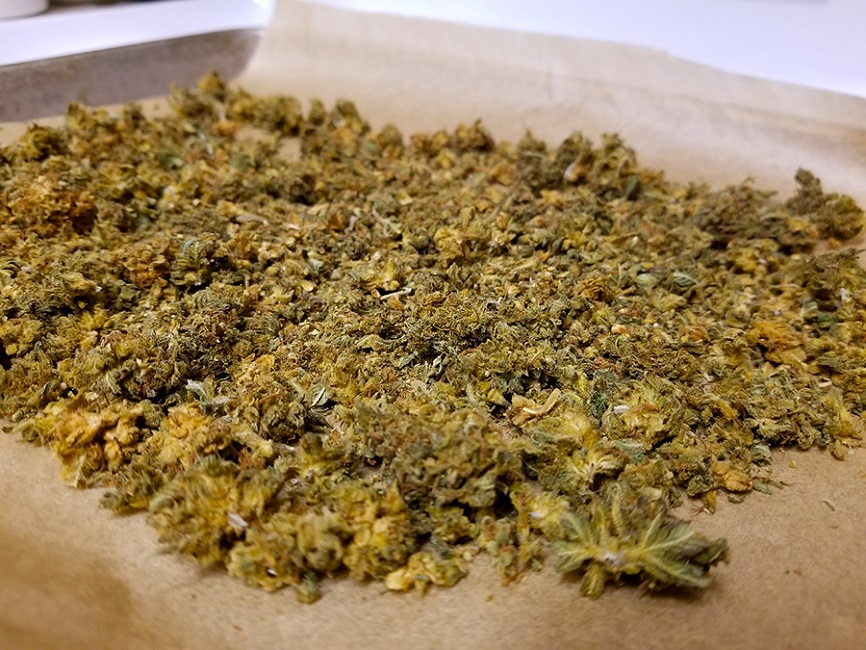 Marijuana trimmings, or bud trimmings, are left over after a grower harvests a crop and manicures the buds. This method also works for shake and other material that is not as dense as marijuana bud. For instructions on decarboxylating bud, see this.

When preparing marijuana to be eaten, made into a tincture, or some other method of ingestion other than smoking or vaporizing, it must first be decarboxylated. This is done so the active components of marijuana will be more easily absorbed by the human body.

When eaten or drunk, an extra step called decarboxylation must be employed. This is accomplished by heating the marijuana under specific conditions prior to incorporating it into a recipe, or consuming it another manner.

The first step is to decide how much mj trim to decarboxylate. If you are not sure, 14-28 grams is a reasonable amount for a first attempt.

After you decide how much trim to decarboxylate, the next step is to make sure it is dry so it doesn’t clump together.

If the trim clumps together there is a chance that it won’t decarboxylate evenly, so dry the trim before attempting to decarb it.

Bud trim is small leaves trimmed away from the bud, there should be no need to grind it. When marijuana bud is decarboxylated, it has to be ground into small pieces.

If there is any bud or dense material mixed in with the trim, grind it to a point where the particles are about the same size as marijuana when it is rolled into a joint, several times larger than grains of salt.

Making it relatively level and no more than about 1 to 1.5 inches/25 to 38 mm deep, is so the marijuana gets heated at the same rate.

If you were to dump the trim into a pile, or if it’s too deep, the material at the center will take longer to heat than the exterior, incomplete decarboxylation.

Wrap aluminum foil around the dish so it is well sealed. Some compounds in marijuana may vaporize when decarboxylating.

Keeping the marijuana as air tight as possible will allow any vapor to be absorbed by the marijuana instead of escaping into the air. Regular foil is ok if that is all you have available. Heavy duty foil is best and can be reused.

Set the oven to 240°F/116°C and wait until it reaches that temperature. If necessary, use an oven thermometer for accuracy. When it reaches 240°F/116°C, put in the pyrex dish containing the marijuana trim in the oven.

The length of time to keep the marijuana in the oven depends on how it will be consumed.

A) Decide how much marijuana trim to decarboxylate.
B) Place the trim in a pyrex dish.
C) Level the trim to roughly the same depth in dish.
D) Wrap aluminum foil around dish so it is well sealed.
E) Pre-Heat oven to 240°F/116°C.
F) When heated, put dish in oven.
G) Wait until decarboxylation time is finished.
H) Turn off oven heat.
I) Leave the door for the oven closed.
J) Wait until cool.
K) Remove from oven.

1 — The reason for keeping the temperature at or below 240°F/116°C is in order to minimize the chance of cannabinoids from being degraded by the heat. Once the temp goes over 250°F/121°C, there is a greater chance of heat having a negative effect.

2 — Dry bud trim can decarboxylate fairly quickly. If it gets too well done the first time you try, next time you work with trim that is dry, reduce the amount of time it gets heated. It should be medium to dark brown when finished, rather than black.

3 — Size of pyrex or oven safe dish: A larger dish will be able to hold more material. At the research center, where these tests were conducted, a set of three pyrex dishes are always at the ready in case of situations like this.

With the set of three pyrex dishes, up to 4.5 ounces of marijuana trim can be decarboxylated at a time. The pyrex dishes are reserved for working only with marijuana, and marijuana extracts like hash oil.

Ways to Drink Your Weed